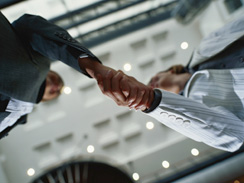 BGI has established partnerships and collaborations with leading academic and governmental research institutions as well as global biotechnology and pharmaceutical companies, supporting a variety of disease, agricultural and environmental applications. Our goal is to accelerate the application, innovation and development of genomics research in a collaborative spirit.

Autism, which is estimated 1 in 110 children in the U.S., is presumed to be caused by a combination of genes and environmental influences. Autism is characterized, in varying degrees, by social and behavioral challenges, as well as repetitive behaviors. The joint project between Autism Speaks and BGI aims to accelerate the research in autism by performing the whole genome sequencing on more than 2,000 participating families who have two or more children on the autism spectrum. http://autismgenome10k.org/

Jointly established by Eli Lilly and Company, Merck and Pfizer Inc., the Asian Cancer Research Group (ACRG) is a not-for-profit company that seeks to increase and improve the knowledge of cancers prevalent in Asia by generating comprehensive genomic data sets and sharing them freely with the scientific community in order to accelerate drug discovery efforts. ACRG’s initial efforts primarily focuses on Asian liver, gastric and lung disease. The collaboration with ACRG and BGI has helped to publish new data on the recurrent hepatitis B virus (HBV). Results from this first-of-its-kind study provide important insights that may be used to improve diagnosis and treatment of hepatocellular carcinoma (HCC), the most common form of liver cancer worldwide. http://www.asiancancerresearchgroup.org/

Supported by the government of China and established by BGI-Shenzhen, CNGB aims to become an international institute which combines biological bank, omics database and a bioresource network together. CNGB operates through collaborative activities between universities, hospitals, and scientific institutes that share an interest in biobanking, resource utilization and bioinformatics. Together in collaboration with the National Museum of Natural History (NMNH), the CNBG will promote biorepository and genomics research, as well as to enhance the mutual exchanges of experience in resource collection and sharing, infrastructure construction and information management. http://nationalgenebank.org/en/index.html

Population genomics study not only provides us numerous opportunities to understand the distinctive features of the population groups, more importantly, it provides an innovative strategy to health care. The 1% Danes’ Genome Project will sequence the genome of 50,000 people with the aims to build up a Danish database, to provide cohort data of Danish for future disease researches, and to develop new mathematics models and bioinformatics analytic tools to promote the development of analytic methodology for population data.

The first Asian genome sequence released by BGI-Shenzhen with a publication in Nature on November 6, 2008 announced the completion of the reference genome for the Yanhuang project. This is the third human individual genome sequenced right after the father of DNA James Watson and the sequencing pioneer J. Craig Venter. Database of this first Asian genome was also constructed for individual genome data sharing and management. http://yh.genomics.org.cn/

All cancers arise due to alterations in DNA. With the evolution of sequencing technologies, it is now possible to contemplate the complete cataloguing of genetic alterations in different types of cancers. As a member of the International Cancer Genome Consortium (ICGC), we’re part of the international effort to harmonize the large number of projects that have the common aim of elucidating comprehensively the genomic changes presented in many forms of cancers that contribute to the burden of disease in people throughout the world. At the sequence-level resolution, most cancer genes with somatic abnormalities occurring at a frequency of greater than 3% will be discovered. http://www.icgc.org/

The 1000 genomes project, launched in January 2008, is initiated by an international research consortium that aims to produce the most detailed map of human genetic variation to support disease studies. BGI, The Wellcome Trust Sanger Institute (UK) and National Human Genome Research Institute (NHGRI, US), are the major supporters and co-initiators of this international project and will be responsible for sequencing the genomes of at least one thousand people from around the world. BGI is carrying out the sequencing of 3 Tb of Asian genomes and providing bioinformatics interpretation. The project is accelerating research for identification of disease-related genetic mutations and laying the foundation for the future of individual medicine and the personal genomics era. As with other major human genome related projects, data from the 1,000 Genomes Project will be made swiftly available to the worldwide scientific community through freely accessible public databases. http://www.1000genomes.org/page.php

The EpiTwin project was initiated as a collaboration between BGI and TwinsUK, with the goal of capturing the subtle epigenetic signatures marking the differences between 5,000 twins. The collaboration is exploring how the actions of genes can be temporarily modified by chemical reactions that may occur randomly or by lifestyle and diet and is looking for differences that explain why many identical twins do not develop the same diseases. Findings from the project may provide key therapeutic targets for the development of drug treatments. http://www.twinsuk.ac.uk/projects/epitwin

Instituted as a collaboration of BGI-Shenzhen with seven countries and eleven institutes from Europe, the MetaHIT project is studying the microbiome constituting human intestinal flora to characterize its functions and implications on health. The goal is to establish associations between the genes of the human intestinal microbiome and our healthcare. http://www.metahit.eu/

BGI and Merck are engaged in a strategic alliance to explore areas of mutual interest in healthcare research and discovery. The alliance aims to create value from the massive output of genomic information enabled by next-generation, high-throughput DNA sequencing and analysis technologies and build the infrastructure to support collaboration in areas such as biomarker discovery, target validation, and drug de-risking and development, etc. Merck and BGI establish strategic collaboration

Established as a collaboration of ten research institutes from Europe and China, LuCamp is conducting complete-exon sequencing on 1,000 abdominal obesity patients and 1000 healthy individuals. The effort is finding new common and rare genetic variations and testing the frequency differences between variations in patients and healthy individuals. http://www.lucamp.org/

HLA, the system of the major histocompatibility complex (MHC) in human, has been reported to  associate with many autoimmune and immunodeficiency diseases. In order to better understand immune disease, BGI and Sweden’s Karolinska Institute University Hospital plan to develop an immunogenetics center with the aim to employ BGI’s newly developed genome capture array ALLinONE, to sequence the exomes, HLA region, regulatory sites, and population-specific SNPs of 100,000 individuals. The 100,000 indviduals include healthy controls and patients with immune diseases.

Launched on January 9th, 2010, this global collaborative project aims to generate reference genomes for 1,000 economically and scientifically important plant/animal species in two years. To date, BGI and its collaborators have initiated about 100 animal/plant genomes projects, with over 50 projects completed. http://ldl.genomics.org.cn/page/pa-research.jsp

Launched in 2000, the Bill and Melinda Gates Foundation aims globally, to enhance healthcare and reduce extreme poverty, and in America, to expand educational opportunities and access to information technology. A Memorandum of Understanding (MOU) was signed by BGI and the Bill and Melinda Gates Foundation to form a collaboration on global health and agricultural development with the goal of achieving common objectives in health and agriculture development, and meaningfully contributing to the achievement of one or more of the Millennium Development Goals. http://bgiamericas.com/bgi-and-the-bill-melinda-gates-foundation-sign-memorandum-of-understanding-on-collaboration-for-global-health-and-agricultural-development/

BGI together with the Potato Genome Sequencing Consortium (PGSC) completed the genome sequence and analysis of the tuber crop potato. The international Potato Genome Sequencing Consortium (PGSC) is a collaboration between 29 research groups; Argentina, Brazil, China, Chile, India, Ireland, The Netherlands, New Zealand, Peru, Poland, Russia, the United Kingdom and the United States. The PGSC has its basis in long-standing research on the molecular genetics of potato within the partner organizations, ranging from the construction of genetic linkage maps in diploid and tetraploid potato. http://www.bgisequence.com/us/newsandevents/news/bgi-contributes-whole-genome-sequencing-and-bioinformatics-exper

Phytophthora is a genus of plant-damaging pathogens which are capable of causing enormous economic losses to crops, forests and ornamental plantings worldwide. BGI and Oregon State University initiate a collaborative project starting from conducting de novo genome sequencing and transcriptome analysis on nine Phytophthora plant pathogens, and eventually on all the known species in the Phytophthora genus.

Genomics-assisted plant breeding has been an important strategy in agriculture to increase yield and improve quality of crops. The urgent need for these goals was highlighted in the collaborative Rice 3,000 Genomes Project conducted by International Rice Research Institute (IRRI), the Chinese Academy of Agricultural Science (CAAS), and BGI. In order to represent the global diversity of rice, this project aims to sequence 3,000 rice genomes with an extension of the project to ultimately sequence 10,000 rice genomes.

Cassava is the fourth most important provider of dietary calories in developing countries (after maize, wheat and rice). The International Center for Tropical Agriculture (CIAT) and BGI launched a collaborative project to sequence 5,000 cassava genotypes, including landraces, improved varieties, experimental populations and related wild species of the crop. Results of this research project will enable a major advance in applying modern genomics technology and analytics to improve this orphan crop.

BGI is a leading participant in the massive multidisciplinary effort to systematically determine the functional and evolutionary diversity of microbial communities across the globe for the benefit of the planet and mankind. With the goal of examining the relationships between specific environments and biology, the EMP will analyze 200,000 samples from researchers around the globe using environmental DNA sequencing, or metagenomics, along with other next-generation sequencing to produce a global Gene Atlas.

In addition to being responsible for leading the effort to identify sample collections in Asia that can be leveraged against the EMP, BGI will provide DNA extraction, amplification, sequence library construction and sequencing for metagenomics projects as well as computational resources in the development of the bioinformatics pipeline that will provide an analysis framework for the vast amount of data to be produced by the EMP. http://www.earthmicrobiome.org/

A collaboration of leading scientists representing major zoos, museums, research centers, and universities around the world, assembling a collection of DNA sequences representing the genomes of 10,000 vertebrate species. The project will capture the genetic diversity of vertebrate species and create an unprecedented resource for the life sciences and for worldwide conservation efforts. Using BGI’s sequencing technology and bioinformatics platform, the goal is to sequence the genomes of the first 101 vertebrate species within 2 years. http://genome10k.soe.ucsc.edu/

BGI officially launched 10,000 Microbial Genomes Project on August 1, 2009, seeking collaborations all over the world. The project has generated more than 10,000 microbial reference genomes in two years, covering the fields of industry, bioenergy, environment and medicine. More than 1000 microbial genomes have been sequenced at BGI, with many other projects ongoing. http://ldl.genomics.org.cn/page/M-research.jsp